I am just back from a longer vacation with my current Samsung NX photo equipment. I used my cameras and lenses intensively and the relatively new Samsung NX30 got some more attention than the last weeks. After some work with the camera I found some additional problems and got used to some useful functionality, that I wasn’t aware of before. With this article I want to give you an impression on my findings in the categories Body, Firmware and Power supply. My first impressions can be found in the Samsung NX30 Hands On / Review. I am going to update my conclusion from the previous article with my latest impressions.

The touch screen really comes in handy for focussing. I rarely use the display for touching except for changing the focus area. It just saves much time and gives me more flexibility for spontaneous shots. I don’t want to miss this anymore. Nevertheless I got quite confused sometimes with the different Touch AF modes (Touch AF, AF point, One touch shot). You need to be aware of the special behaviour which is triggered by touching the screen in the different modes. I went nuts trying to change the aperture after touching the screen to move the AF area. Having Touch AF activated it locks the focus (same behaviour as pressing the shutter button half) and this also locks the exposure settings. This makes sense, but I wasn’t aware of this and thought Samsung had implemented another bug here. Changing this setting to AF point will only move the AF area, but it won’t do automatic focus anymore so I stayed with Touch AF. In case I want to change the setting I just press the shutter button half and this enables me to change the exposure settings again.

Another good thing is the swivelling screen on the NX30 (and NX20). I am using this quite often in odd angles as I am often standing on stones in a creek or shooting macros above the ground. The freedom to set the display to whatever angle you need is just good to have. I can’t understand that they removed this flexibility with the NX1, which got only a tilting screen.

The tiltable viewfinder helps with macros and to get a lower angle of view (in bright sunlight). This might also help to held the camera more steady in odd shooting positions. Actually the detection whether to use the EVF or the normal display is not very accurate for persons wearing glasses. The glasses extend the distance from the body to the eyes and there might be issues when the light is reaching the sensor due to the increased distance. Additionally you might not see the entire EVF display which is quite annoying in case you have important things in the edge of the image. I hope this has improved with the new EVF implemented in the NX1.

The on/off switch is really easy to move. In the beginning I liked this, because it was quite hard to move on the NX20. I am using a backpack for my camera and due to the lack of resistance against pressure I found my camera in powered state in my bag sometimes. This wastes some energy, but the power save function helps to reduce the power consumption.

Not a big deal, but due to the larger hand grip it is harder to press the Optical Preview Button.

In the beginning I found it quite irritating that Samsung gave the drive setting an own dial, but on my last journey to the UK I used this dial heavily for landscape photography. Actually I changed quite often between the four modes: I used BKT for Auto Exposure Bracketing/HDR, Timer for long exposures,  Continuous shooting for moving animals  and the default mode for anything else.

The firmware has improved since the the first version, but they haven’t fixed all the (reported) bugs so far, there is more space for improvements, Samsung!

Samsung implemented a High Dynamic Range (HDR) option for photos taken in JPEG mode. I actually saved this as a custom mode to be able to switch to it faster. Anyway I am not very happy with the HDR photos produced by the camera. Often I can get better pictures by simply pushing the lights and shadows of the RAW files in Lightroom. If you really want to get good HDR photos I would recommend to use the Auto Exposure Bracketing (AE Bracket) the camera supports, which takes three photos with different exposure compensation values. Using PhotoMatix (or other HDR software) you can merge these three photos and normally you can gain better results with this technique.

Below you can see three images to show the difference between the Samsung HDR function and other ways of HDR (alike) development. In my opinion the HDR function of the Samsung NX30 produces the worst photo of the three alternatives.

The editing options for images are quite handy. Anyway converting a huge amount of images from RAW to JPEG (e.g. to show them to a friend on another device) was really time consuming as you had to convert every photo individually. Additionally the camera jumps back to the first image after each conversion. This is a real pain with 1000 photos on the SD card. I would love to get a function for batch conversion of RAW files to JPEG format. Other than that I would like to be able to zoom into the image in the instant preview after taking a photo. I always have to switch to the playback mode to check the sharpness of a photo.

Previously Samsung introduced a focus distance meter for the lenses with mechanically coupled focus ring (60mm/85mm). Additionally they introduced another focus distance meter in manual focus mode for the other lenses, but it doesn’t show you a discrete number of meters. It simply gives an approximation, between the minimum focus distance and infinite. Unfortunately it is not very precise. I tried to to use it for astrophotography, but couldn’t get a sharp image using this function. At least it gives you an approximation which can be quite useful for manual focussing.

When using legacy lenses with an adaptor you can get problems with your NX30, as the photos might get green corners. At least my camera shows this phenomena and some other users also reported this. This is a huge drawback for me . See the example below: 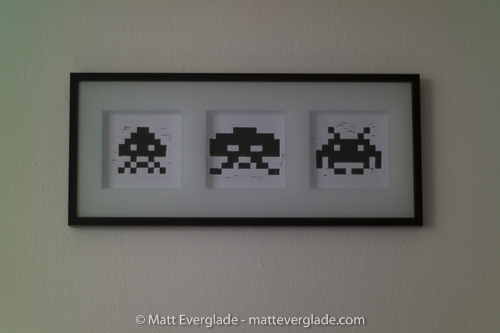 Post note: Michael Tadd found a solution for this problem. You can read about the problem and the solution here.

Focus peaking really helped me to decrease the number of rejected photos due to a lack of sharpness. This is especially handy for macro photography using the Samsung 60mm macro lens lens in conjunction with DMF. It also helps a lot when using adopted legacy lenses, but sadly the use of legacy lenses is currently problematic due to the colour problems mentioned above.

The overexposure guide, often called Zebra, shows temporarily a black area when the camera detects an area which has no structure in it respectively is completely white. This helped me a lot to expose my images better. In post-processing I was able to restore more details from the RAW files. Due to this I changed the way I am shooting photos a little bit. Nowadays, I am underexposing the photos more often (up to -2EV). At ISO 100, 200 and to some degree ISO 400 you can restore much information from the shadows (and highlights) using RAW file format and Lightroom. This helps to gain a better dynamic range on the final image.

Samsung introduced a function to take interval captures without a remote control. This is quite handy and is much easier than taking a remote control with you. This also helps as you can recharge the camera while in use. At first I thought this function has been restricted to about 400 shots, although there are 4 digits in the settings dialog. Later I found out that this was due to lack of storage space on my SD card, so this is actually the limiting factor, which makes sense.

Not much to say here. I had several firmware crashes using the current firmware and this needs to be addressed by Samsung if they want to be taken serious as camera manufacturer. It is better than with the first firmware, but there is more space for improvements.

Samsung has some problems to get their accessories in the stores. It took month to deliver their batteries and other stuff into the stores. But sometimes you need a spare battery. Patona offers a good battery for the Samsung NX30, which is cheaper and nearly as good as the original battery provided by Samsung. I also bought a power pack to charge my mobile phone and the NX30. Actually Samsung allows to charge the camera via USB while in use, which is very handy. This helped me to stay outside with the camera for some days without recharging.

I got used to the camera and overall I am happy with the new hard- and software. There are some major and minor glitches in the firmware Samsung hopefully addresses in one of the next firmware updates. The camera body itself is a step forward. I can repeat my conclusion from the Hands On / Review with some minor adjustments:

Generally Samsung is heading into the right direction. The NX30 has introduced several improvements, but some features are way too restricted (e.g. bulb mode) or not well thought out (e.g. JPEG transfer only in WiFi mode, new batteries). The ergonomics are on a high level and especially the new hand grip is a major improvement. The new hardware is now up to date, but the sensor has not improved since the NX20, but the new 28 MP BSI sensor used in the NX1 shows that Samsung can do more. The EVF is a double-edged sword as there are pros (e.g. tiltable, higher resolution) and cons (e.g. smaller size). The display is useful as it can be used as touchscreen. Introducing a new type of batteries is an annoying step back, although you can recharge it while in use using a power pack. The firmware/software has some new fancy features implemented (e.g. new settings, WiFi enhancements), but it still has minor and major bugs after some firmware updates. The new options for flashing and filming, especially audio recording using the microphone port, are more than welcome for serious photographers. After the first review I sent the camera back to Samsung, but after some time I had to replace the NX20 due to a minor problems and got a good price for the NX30. Apart from the major firmware bug with the legacy lenses I am overall happy with the camera.